First up, grab a WebGL-capable mobile device - I recommend a Nexus - and play the current build to see what I’m talking about.

What kind of touch controls do we want for Encounter?

It’s possible to get quite sophisticated analog controls on a phone. Xibalba is a good example in the first person shooter category. You can choose to turn either a little, or a lot by sweeping your thumb on the screen.

For C64 games though we’re emulating the simple 8-way controls of a joystick, so complex analog turning isn’t appropriate. Think of this bad boy: 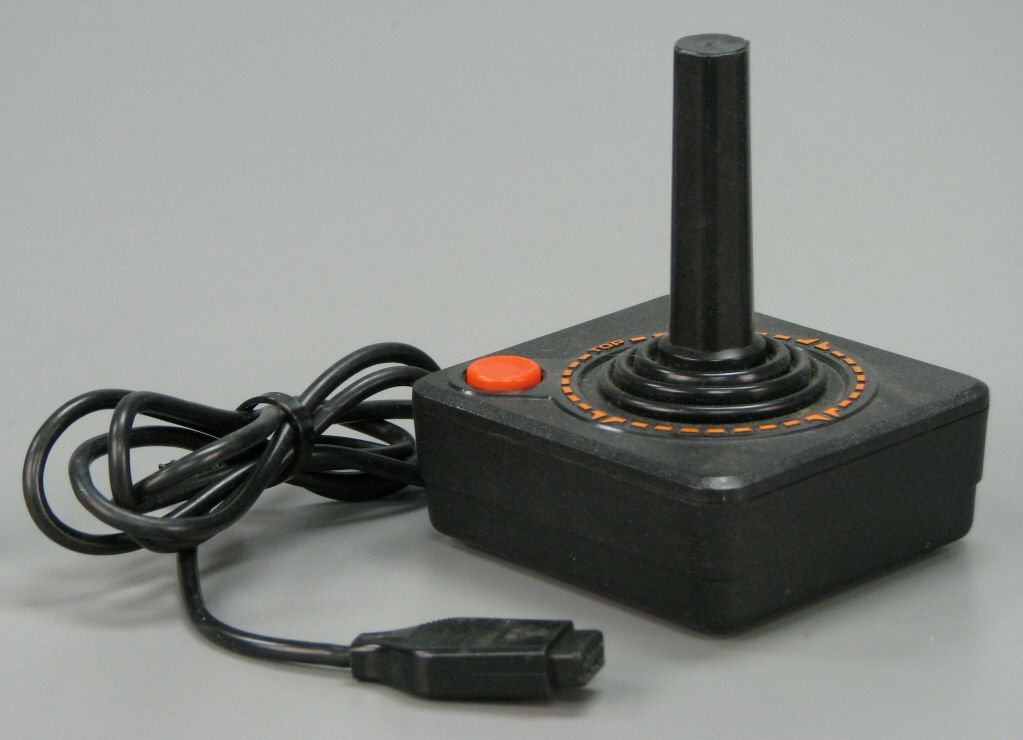 I had a few goals in mind for the controls.

For reference, all my code is here in Touch.js.

Surprisingly for a first person game, I currently optimise for portrait orientation. The extra space at the bottom of the screen is ideal for the all-important radar.

Buttons are just rectangles overlaid on top of the display.

To make the touch zones clear I picked a red colour with reasonable contrast against a green background - the colour of level one - and made it 90% transparent. A dotted line to highlight the edges and we’re done. This is all done in straight CSS:

Rather than use fixed sizes for the virtual buttons - 50px high or whatever - I define them as percentages of the screen size. This gives us a fair shot at supporting all resolutions and orientations. Writing special cases for a zillion devices isn’t cool.

Given the portrait style these numbers work well:

We’re literally just saying a d-pad button width is 18% of the screen. It looks like this (d-pad is at bottom left): 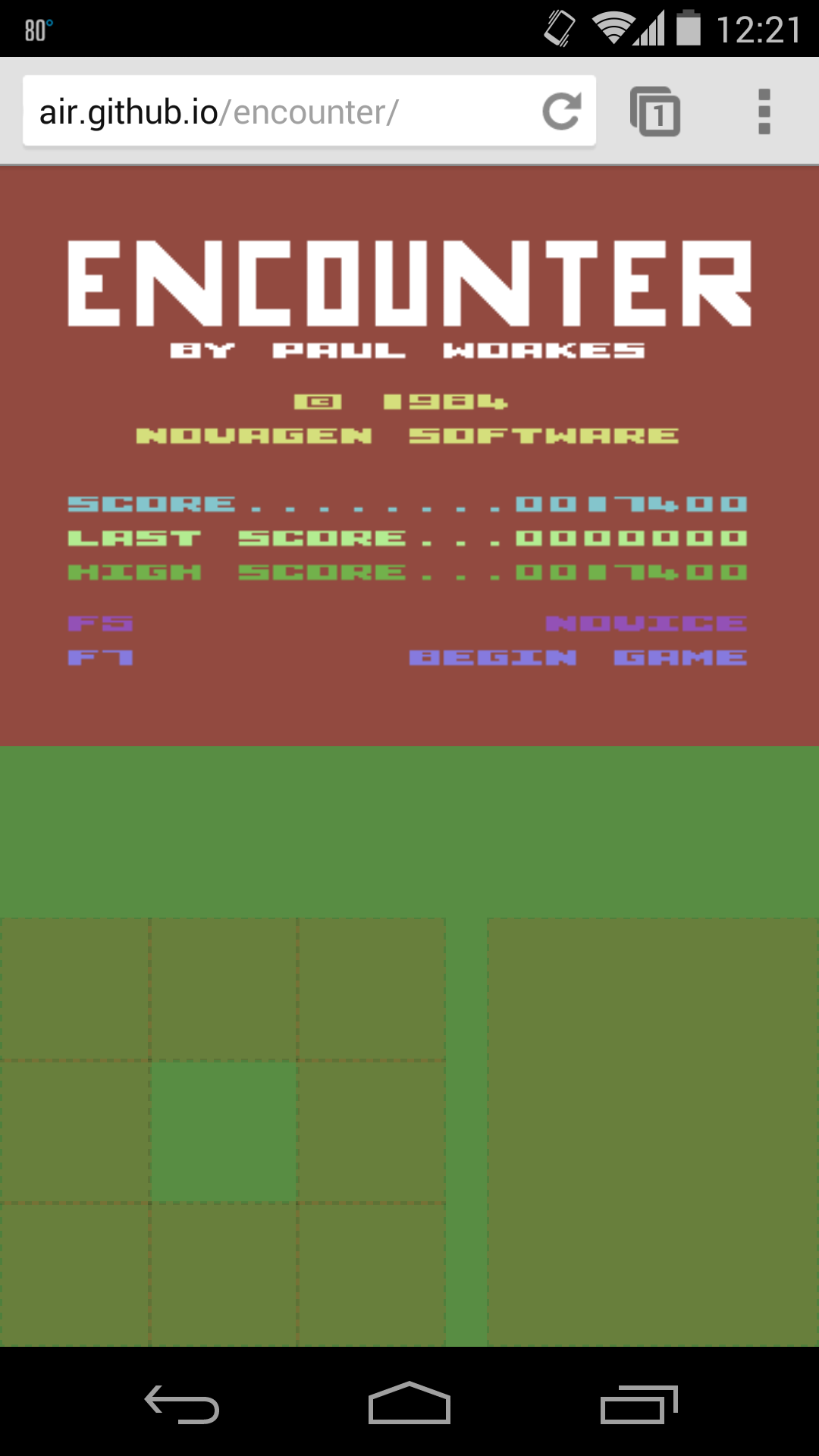 This is how it turns out in landscape on the Nexus 5 - the red clashes a little here but hopefully you get the idea: 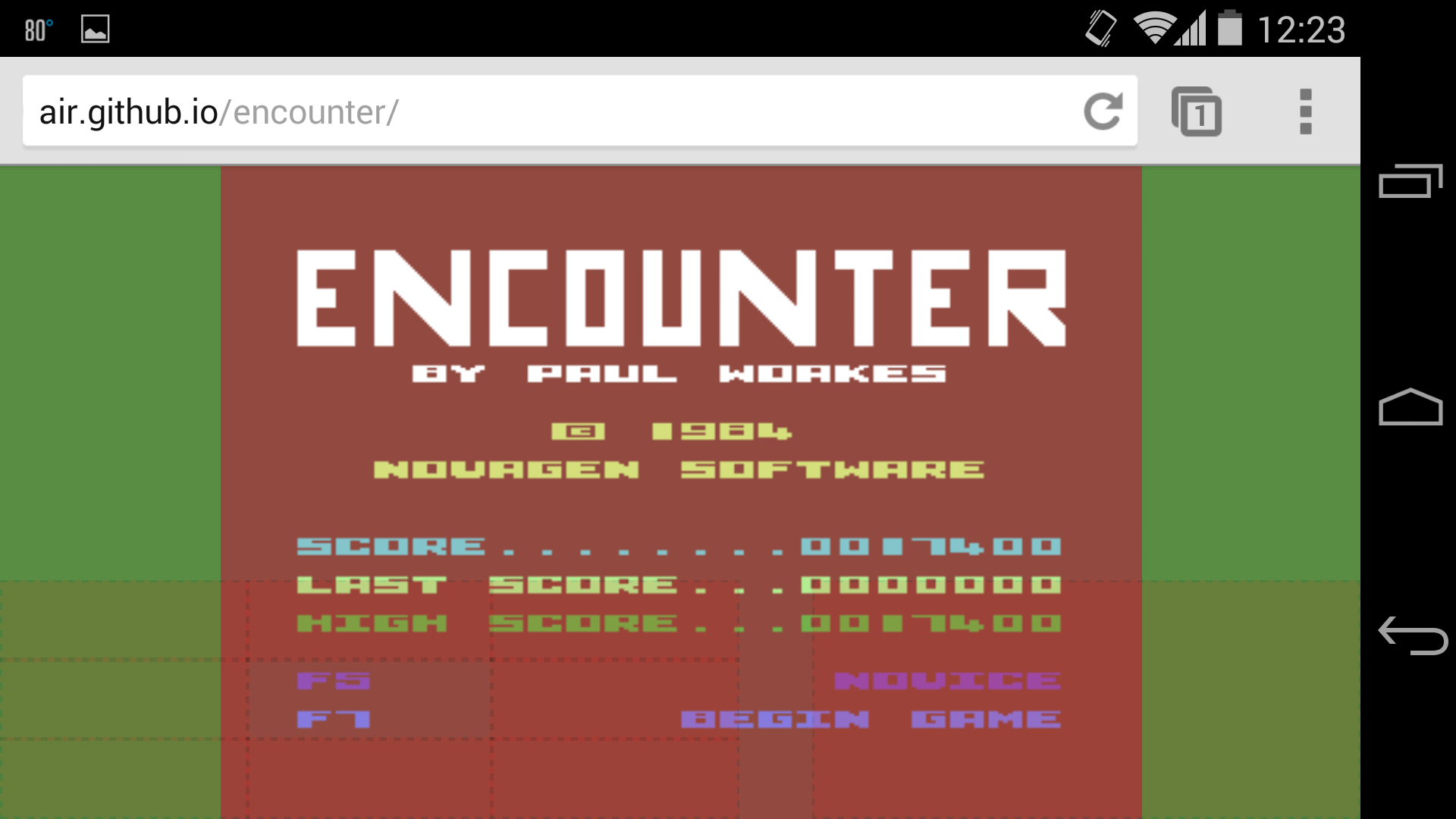 There’s definitely scope to adjust this further, but good enough for now.

Notice we explicitly put a dead zone in the middle of the d-pad. We need a place for the thumb to slide when no movement inputs are needed; the thumb shouldn’t have to leave the screen at any time.

2. It’s all about events

JavaScript provides a solid Touch API. When touches occur, they’re given to you as events occurring against the relevant DOM element. The hard work of tracking multiple fingers moving around is done for you.

So you can define a <div> for a button, place and colour it on the screen, and attach a touch handler. A touch on the button will trigger the handler, and touches against the background will not. Easy!

All the other considerations - e.g. size and placement of the button - become pure CSS issues. We’re just manipulating a CSS div.

The bible for the Touch API is the Mozilla reference doc. It’s worth reading, but you won’t get the whole picture until you’ve wired up some buttons and observed what happens in practice.

In the real world, the events you worry about are:

I never saw touchleave or touchcancel in my testing.

So the naive implementation for a button is just this:

Hooking up the controls

All buttons should work in the same way. The only thing that differs is which bits of state we twiddle when they’re pressed.

So I have a generic factory function createDPadButton that does the donkey work of creating a div and attaching handlers. You pass in a couple of extra functions to define what should happen when the button is pressed, and unpressed. Unpressed is totally a word.

This gets us a functional button, and all that’s left is to move it into position, above two other buttons in this case:

The approach above gives you functional controls, but they don’t feel good. You have to peck at the buttons to get them to work. We want a single constant touch to work as you slide it around. Should be easy right?

The Touch event system gets really interesting - i.e. unintuitive - when you start sliding your finger around.

So a touchmove event does not tell you which button is being pressed. We need something like this pseudocode:

You can see the above implemented in Touch.js in the handler beginning button.addEventListener('touchmove'....

Two bits of magic are required to make this work:

The finished touchmove logic is relatively simple but it took a great deal of experimentation to see how the events actually behave.

Another issue to look out for is drag behaviour on your background. If the browser believes that your canvas doesn’t match the window size exactly, the user will be able to drag your display around. It’s distracting.

If like me your canvas isn’t quite absolutely perfect, work around the issue by consuming all touchmove events that occur outside of your buttons:

If you play on the desktop, you don’t want to see the red buttons. How do you know from JavaScript if you’re on a touch device?

This is tougher than it looks. The best effort I have so far is:

This worked well until a recent update of Windows 8 - I assume in support of Surface devices. Even though my Windows 8 desktop PC has no support for touch, the OS fakes it anyway and we get a false positive.

I notice the Ghost blogging platform - powering this page - suffers from the same bug: the editor thinks I’m on mobile when I use Windows 8.

Detecting touch reliably seems a bit of a mess judging from stackoverflow - let me know if you know a sure method.

Last tip: Chrome on the desktop has a neat ability to emulate touchscreen devices. It’s not perfect but it saves a bunch of time on layout issues.

Appendix: Use the code

The simplest way to get this code running:

Notice, nothing will happen on a desktop browser, because of these lines in Touch.js: